1 Peter 5:1-4 (NIV) To the elders among you, I appeal as a fellow elder, a witness of Christ’s sufferings and one who also will share in the glory to be revealed: Be shepherds of God’s flock that is under your care, serving as overseers– not because you must, but because you are willing, as God wants you to be; not greedy for money, but eager to serve; not lording it over those entrusted to you, but being examples to the flock.  And when the Chief Shepherd appears, you will receive the crown of glory that will never fade away.

Apostle Peter reiterates the same charge that he himself received from the Lord Jesus Christ (see John 21:15-17). The one single most important role of the pastor or elder is to be “shepherds of God’s flock that is under your care” (verse 2). This includes providing pastoral and biblical oversight, discipline, instruction, counseling so that the people of God can grow into Christ-like maturity.  Shepherds need to guard themselves against the negative motivations for pastoral ministry such as working out of obligation, being greedy, or bossy. Instead they should serve because they are willing, eager, and exemplary.  Shepherds should also know that they are really under-shepherds, with the Chief-shepherd being Jesus Christ who will at the end reward those who are faithful.

Do you have a pastoral responsibility in your church (such as pastor, elder, small group leader, women’s leader, etc.)? How do you measure up in light of today’s passage? 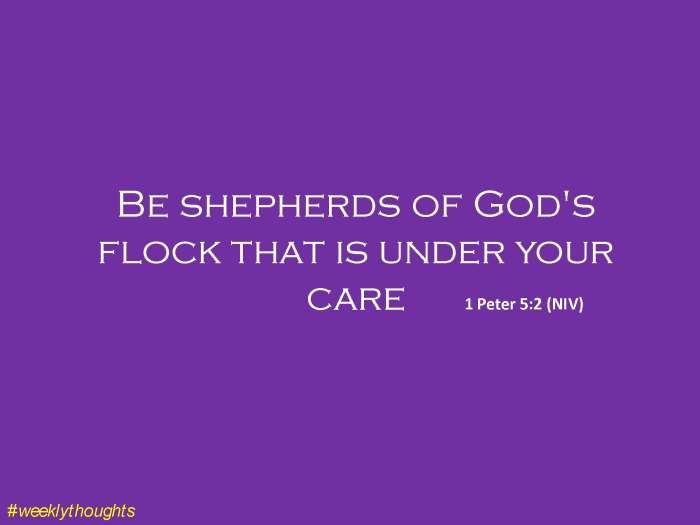 Humble Yourself before God

Young men, in the same way be submissive to those who are older. All of you, clothe yourselves with humility toward one another, because, “God opposes the proud but gives grace to the humble.” Humble yourselves, therefore, under God’s mighty hand, that he may lift you up in due time. Cast all your anxiety on him because he cares for you (1 Peter 5:5-7).

Young people are ambitious and active. But they can also be easily entrapped by pride. Pride may cause them to despise the wisdom of those who are older than them, thus making the pastoral ministry hard. We all need to know, though, that pride is not exclusive to the youth. Pride puts us on the wrong side of God. “God opposes the proud”(verse 5). No one would want to have God as their opponent. In the highly competitive world that we live in, it is easy to get worried about promotions, accomplishments or worldly accolades. Keep in mind that it is always rewarding when God promotes us in His own time. We, therefore, should not be anxious or stressed out about human accomplishments but rather look up to God who deeply cares for us.

Do you sometimes find yourself in unhealthy competition for recognition and promotion? It is wise to wait on God to “lift you up” in His time.

One thought on “Shepherding God’s People”