Numbers 11:26-29 (NIV) However, two men, whose names were Eldad and Medad, had remained in the camp. They were listed among the elders, but did not go out to the Tent. Yet the Spirit also rested on them, and they prophesied in the camp. A young man ran and told Moses, “Eldad and Medad are prophesying in the camp.” Joshua son of Nun, who had been Moses’ aide since youth, spoke up and said, “Moses, my lord, stop them!” But Moses replied, “Are you jealous for my sake? I wish that all the LORD’s people were prophets and that the LORD would put his Spirit on them!”

Are you jealous for my sake?

Last weekend I traveled to join a friend who was having a thanksgiving event in his village.  For the last 17 years I have been blessed to see God at work in the life of this dear brother and later his wife (and now children). The following day I was asked to speak to a group of church leaders who ministry in several churches in that community. I chose to speak on a subject that I called Ministry Pitfalls. One of the pitfalls I talked about was jealousy.

I don’t know about other people but let me be honest with you; sometimes I struggle with jealousy. We become jealous of others when we think that we deserve to be in a more privileged position than them but then we realize (or feel) that they are more successful or better than us. This is so because we sometimes–in fact most of the time–have an unrealistically high view of ourselves. We think that we are smarter, more hard working or more beautiful than we actually are. We overestimate our abilities. Another reason we are jealousy is due to sheer selfishness. We live in an acutely egocentric generation; an “I-generation.” It is either I-first or I-only.

I wish that all the LORD’s people were prophets and that the LORD would put his Spirit on them!

So, how do we deal with jealousy? Let me suggest three ways: 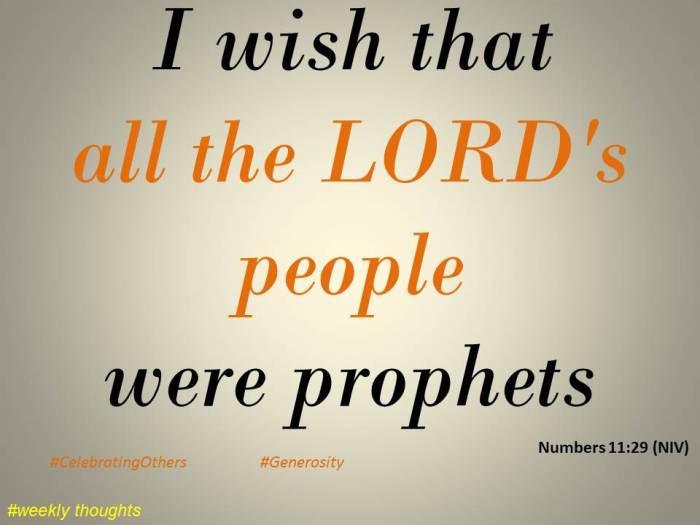 Who are you going to celebrate this week?

2 thoughts on “Celebrating Others”